The Cloth That Binds

When we think of the United States Virgin Islands, images of crystal clear beaches, rolling hills, and friendly faces all come to mind. The U.S. Virgin Islands is quite the cultural smorgasbord. One can walk the streets of the various towns and stumble upon architecture from Danish occupation as well as various other building styles. As you weave your way in and out of the different walkways your nose is greeted with the smells of the different foods that keep us all delightfully satiated. You can turn any corner and hear various languages or dialects, which proves that we are a wonderful mix of the inhabitants of the global world. Until recently, one aspect of our culture was not as clear-cut as it is today. From the shores of India, into the villages of Africa, right to the waters of the Caribbean, madras has clothed many bodies for centuries. 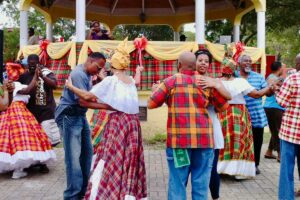 The madras cloth is a lightweight cotton fabric that is traditionally hand-woven into plaid, stripes, or checkered patterns. Woven with semi-permanent dyes, the bleeding of the dyes is what gives this cultural icon its soft, muted colors. Throughout the history of the Virgin Islands, madras has always played a key role in cultural expression and decoration. One can find madras among the sea of dancers dancing the quadrille to infectious Quelbe music, both of which are honored as the official dance and music of the U.S. Virgin Islands. Madras can be seen adorning the costumes of our spiritual stilt-walking guardians, the Mocko Jumbie. During the annual Agricultural Fair held in February on the big island of St. Croix, residents and visitors alike can be seen in droves in culturally fashion-forward garb. Different colors and patterns of madras hug the bodies of fair-goers creating a quilt of colorful beauty for what seems like miles. It is quite impossible to spend a day on one of the Virgin Islands without seeing madras at least once or twice. If you catch a view of the Virgin Islands from atop, there are several communities whose paint colors create a huge madras blanket from the sky.

Each color was mindfully picked to represent the territory in a gorgeous cohesion of colors. Turquoise pays homage to the waters that so gently encircles the land while the royal blue represents the mysteries of the deep sea harbors. The pink honors the conch shell which is our own sweet battle cry; freedom forever! The white represents flour stacks and the yellow gives reverence to the Ginger Thomas, the official flower of the territory. To round out the colors there is green to show respect to our rich natural resources and red that expresses the love and strength of Virgin Islanders. The official madras is a lovely complement to the flag of the Virgin Islands for which we wave with pride. We encourage you to go and get a piece of history and embrace it in your own creative way!