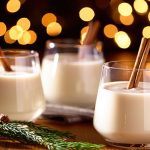 Eggnog is a staple during the holiday season. Down here, Coquito is our flavor of the season! Also known as Puerto Rican eggnog, Coquito is a thick decadent drink that can be kicked up a notch with the addition of rum. We love Coquito so much that we even have a festival in its honor. If you love coconut and eggnog, then Coquito is a must have! Try out this Coquito recipe and let us know how you like it!

Combine evaporated milk, condensed milk, coconut cream, and coconut milk in a large blender and blend until well combined. Add the rum, vanilla, and ground cinnamon, and blend in. (If your blender is small, do this in batches and pour into a large bowl as you go.)

Pour into a pitcher or glass bottles with sealed lids and drop in the cinnamon sticks and vanilla bean halves. Cover and chill in refrigerator for at least 2 hours or until very cold.

Serve straight in small glasses garnished or on the rocks in larger ones. Garnish with a sprinkle of cinnamon and a cinnamon stick. Leftovers will keep tightly sealed in the refrigerator for about one week (shake the jar vigorously each time before serving).